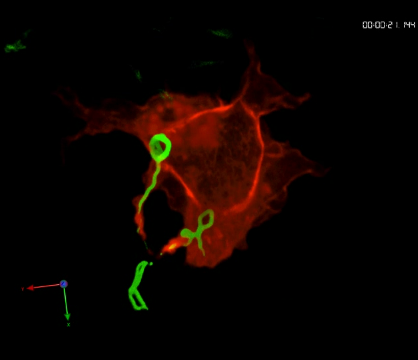 Enrichment of GFP-Daam1ΔC50 during phagocytosis of borreliae.
Confocal micrographs of primary human macrophage expressing GFP-Daam1ΔC50 (green; A) which is accumulated at the uptake structure of a Borrelia cell visualized by Hoechst 33342 staining of DNA (blue; B) with merge shown in (C). Scale bar: 5 µm 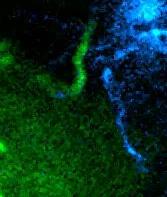 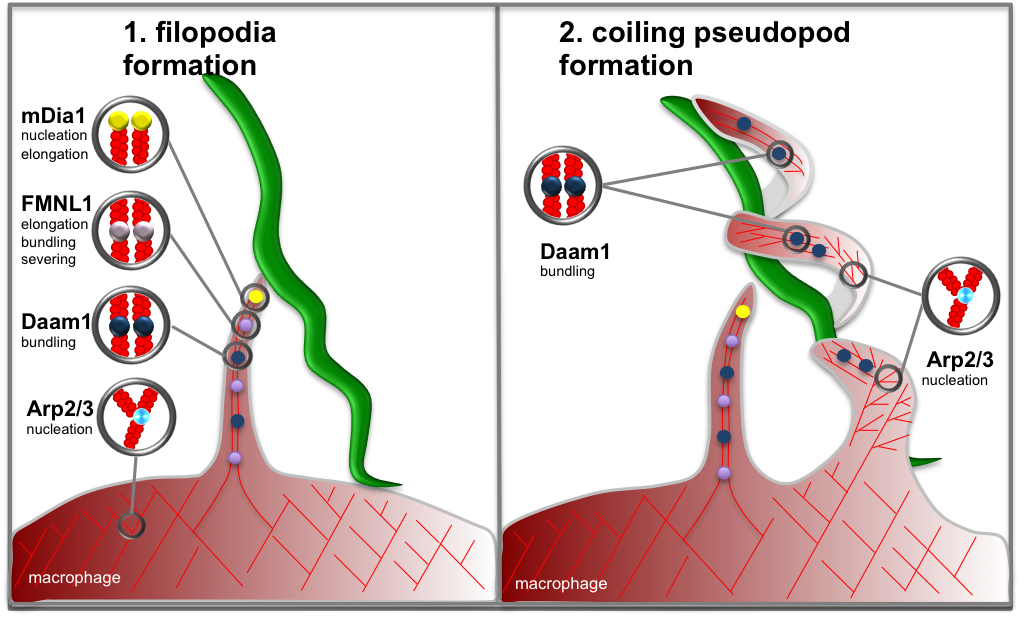 Model of formin- and Arp2/3 complex dependent actin regulation in coiling phagocytosis of Borrelia.
(LEFT) Upon stimulation with borreliae, macrophages form filopodial protrusions that arise from the cortical network. Filopodia are enriched in the formins mDia1 (localized at tips) and FMNL1 (localized at tips and shaft), which probably contribute to longitudinal growth of filopodia, and Daam1 (localized in filopodial shaft) which is probably involved through its actin-bundling activity. (RIGHT) Upon capturing of a Borrelia cell by filopodia, the spirochete is enwrapped by a coiling pseudopod. The flexibility of coiling pseudopods that enables them to enwrap the spiral-shaped borreliae is probably due to dot-like accumulations of Arp2/3 complex, which lead to formation of small branched actin networks and probably act as “hinges” at coiling nodes. Click image to enlarge

We are interested in the molecular mechanisms regulating Borrelia uptake and focus especially on the involvement of actin-regulating factors such as Arp2/3 complex and formins in this process. Earlier, we could show that coiling phagocytosis of borreliae is regulated by CDC42 and Rac1 and involves recruitment of Arp2/3 complex and WASP (Linder et al., 2001). Recent results show that also the the formins mDia1 and FMNL1 are enriched at macrophage filopodia that are induced by contact with borreliae. Knockdown experiments underline the requirement of both formins for the formation of Borrelia-induced filopodia and for final internalization of the spirochetes (Naj et al., 2013; see model).
We could also identify the formin Daam1 as a further player in the regulation of phagocytosis of borreliae. Daam1 plays a dual role during Borrelia uptake, first as a regulator of Borrelia-capturing filopodia and second during the formation of the coiling pseudopod that enwraps the bacterial cell during internalization (Hoffmann et al., 2014). Knockdown experiments underline the requirement of all three formins for successful uptake of borreliae by primary macrophages. Until now, it was not clear whether coiling pseudopods develop from filopodia or if they constitute independent structures. Our live-cell experiments showed that Daam1-positive coiling pseudopods arise as a second independent structure from the macrophage surface and enwrap borreliae (Naj et al., 2013; Hoffmann et al., 2014; see model). 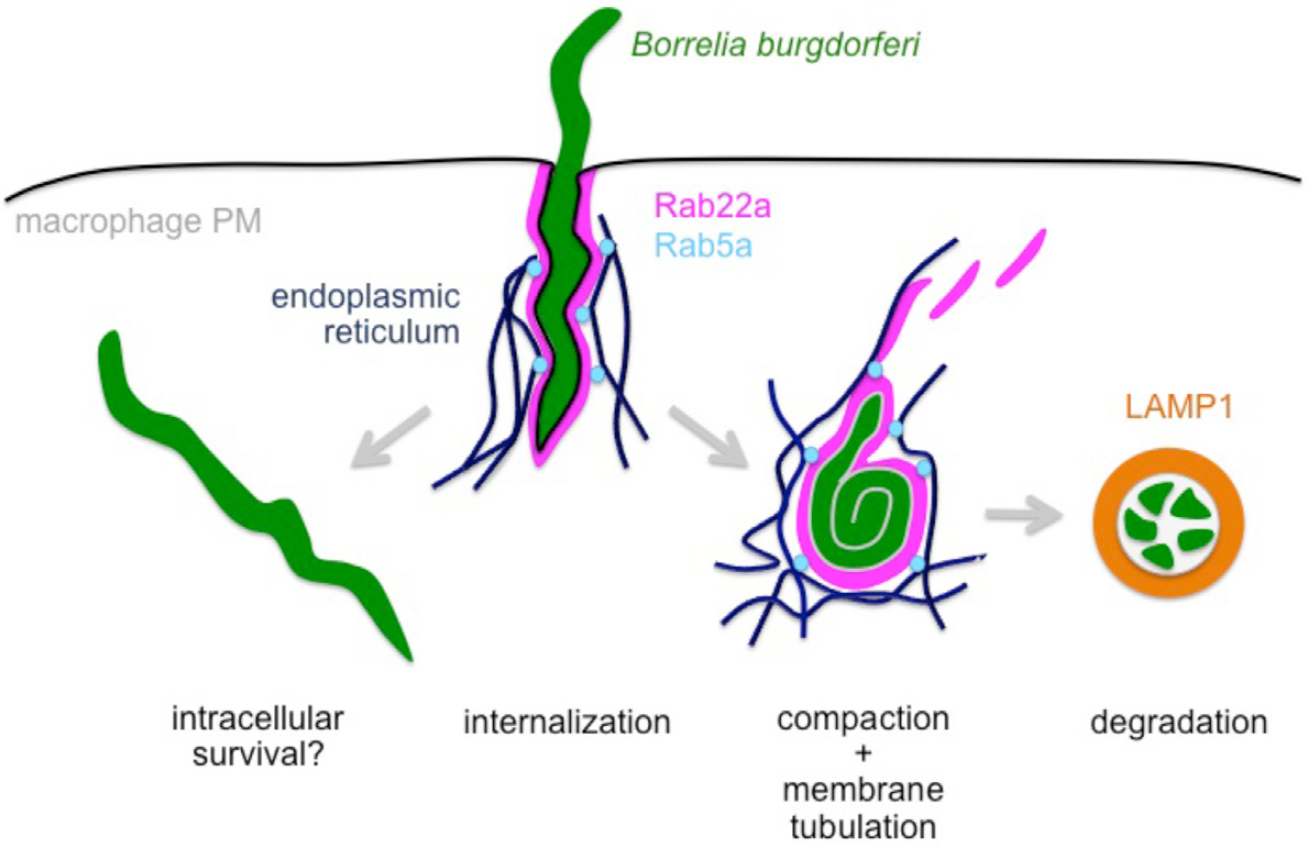 Model of RabGTPase-dependent intracellular processing of Borrelia burgdorferi by macrophages.
Borreliae captured by macrophages via coiling pseudopods are internalized through uptake into Rab22a-positive phagosomes. Phagosomes are subsequently contacted by Rab5a positive vesicles mediated by the endoplasmic reticulum. Subsequent membrane tubulation causes reduction of the phagosome surface, leading to visible compaction of borreliae. Further maturation of this compartment leads to its development into a degradative phagolysosome, indicated by the presence of the lyosomal marker protein LAMP1, and resulting in elimination of spirochetes. In contrast, escape from Rab22a-/Rab5a-dependent processing can lead to enhanced intracellular survival of borreliae. Click image to enlarge. (Naj & Linder 2015, J Cell Sci 12)

After coiling phagocytosis borreliae are initially internalized into a phagosome positive for the small RabGTPase Rab22a. Subsequently, the phagosome is contacted by Rab5a positive vesicles. Quickly after internalization, the elongated spirochetes are compacted into globular, dense structures. This striking compaction of borreliae is accompanied by repeated tubulation of membrane from phagosomes, suggesting that reduction of the phagosomal surface could be a driving force for spirochete compaction. Interestingly, fission of membrane tubules occurs preferentially at sites where Rab5a positive vesicles contact the Rab22a positive phagosomal membrane, indicating that the concerted activity of both RabGTPases is necessary for this process. Consistent with previous reports, that showed the endoplasmic reticulum (ER) contacts Rab5 positive early endosomes at subdomains just before fission occurs at those sites, it was observed that the ER forms a network around Borrelia-containing phagosomes and that Rab5a vesicles contact the Rab22a-positive phagosomal membrane along the endoplasmic reticulum (Naj & Linder, 2015, see model). 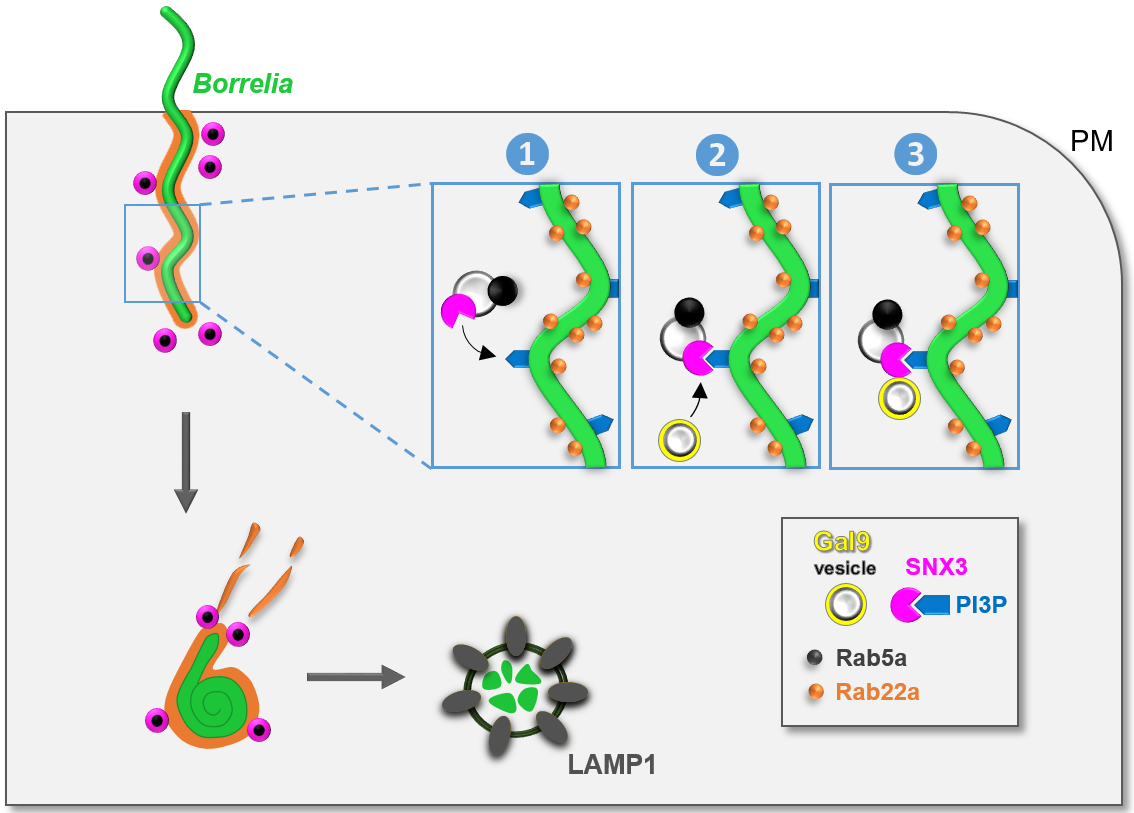 Model of SNX3-dependent processing of borreliae by macrophages.
B. burgdorferi is internalized by macrophages through uptake into Rab22a-decorated phagosomes that are contacted by Rab5a vesicles that also contain SNX3. SNX3 enables docking of Rab5a vesicles to phagosomes by binding to PI(3)P on the phagosomal surface (1), which is enriched at sites of high curvature due to the helical shape of the spirochete. SNX3 also recruits, by its C-terminal region, a second subset of vesicles positive for galectin-9 (2+3). Both Rab5a and galectin-9 contribute to phagosome compaction and phagolysosome maturation, leading to the elimination of spirochetes by macrophages. PM: plasma membrane. Click image to enlarge. (Klose et al. 2019, J Cell Biol 218).

It could be reported that previously found Rab5a vesicles carry sorting nexin 3 (SNX3), and that SNX3 binding to phosphoinositol-3-phosphate (PI(3)P), a phospholipid of the phagosomal coat, enables their tethering to borreliae-containing phagosomes. The SNX family comprises a heterologous set of proteins characterized by a phox (PX) domain, which enables binding to phospholipids, especially PI(3)P. We identified SNX3 as a regulator of phagosomal compaction, phagolysosome maturation, and intracellular processing of borreliae. siRNA-induced depletion of SNX3 led to a strong reduction in borreliae phagosomal compaction, which was rescued by expression of an siRNA-insensitive wildtype construct, but not by a mutant defective in PI(3)P binding. SNX3 depletion also led to reduced phagolysosomal maturation and increased intracellular survival of borreliae. Moreover, we identify galectin-9 as an interactor of the SNX3 C-terminus. Galectin-9 is a member of the galectin family that is known to bind carbohydrates on the cell surface but has also emerged as an intracellular regulator of protein and membrane trafficking pathways (Klose et al., 2019, see model). 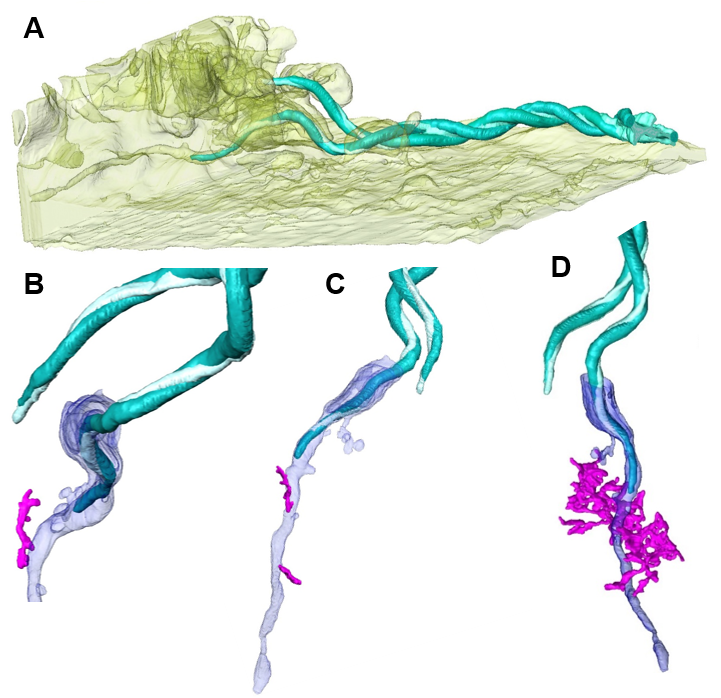 Recently, we used for the first time focused ion beam scanning electron microscopy tomography (FIB/SEM tomography) to visualize the interaction of borreliae with primary human macrophages at high resolution (~12 nm). We report that interaction between macrophages and the elongated and highly motile borreliae can lead to formation of membrane tunnels that extend deeper into the host cytoplasm than the actual phagosome, most probably as a result of partial extrication of captured borreliae. We also show that membrane tubulation at borreliae-containing phagosomes, a process suggested earlier as a mechanism leading to phagosome compaction, but hard to visualize in live cell imaging, is apparently a frequent phenomenon. Finally, we demonstrate that the ER forms multiple STIM1-positive contact sites with both membrane tunnels and phagosome tubulations, confirming the important role of the ER during uptake and intracellular processing of borreliae. Furthermore, tunnel lengths were quantified using RFP-LactC2 overexpression and GFP-expressing borreliae with outside staining technique. These results showed that tunnels can extend up to 12 µm into the cytoplasm, with the majority of tunnels falling into the 2-6 µm size range (Klose et al. 2020, see model).

Model of Borrelia uptake and tunnel formation.
(1) Internalization of highly motile B. burgdorferi spirochetes by macrophages is mediated through contact of filopodiae and followed by enwrapment by a coiling pseudopod. (2) Contraction of the pseudopod leads to partial uptake of the Borrelia cell into the nascent phagosome positive for phosphatidylserine (PtdSer) that is contacted by the endoplasmic reticulum (ER). (3) Endoflagella-based motility of the extracellular part of the spirochete can lead to partial extrication of the spirochete and formation of an intracellular membrane tunnel which retains contact to the ER. (4) Membrane tubulation leads to compaction of spirochetes via loss of phagosomal surface. (5) Degradation of globular borreliae in mature phagolysosomes. PtdSer: phosphatidylserine; ER: endoplasmic reticulum; PM: plasma membrane. Click image to enlarge. (Klose et al. 2020, J Cell Sci epub ahead of print).

Current studies are focused on mechanisms driving the intracellular processing of borreliae by human macrophages and their phagolysosomal maturation including the mechanism of compaction.