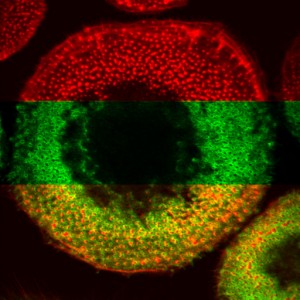 Macrophages
Macrophages contain numerous dynamic, dot-like adhesion structures called podosomes. They consist of a core of actin filaments and associated proteins and a ring structure containing plaque proteins such as vinculin and talin (see image). Besides their role in adhesion, podosomes most probably have important functions in migration and invasion of cells.
We are interested in the proteins and mechanisms involved in podosome regulation. Earlier, we could show that WASp (Wiskott-Aldrich Syndrome protein) and actin-nucleating Arp2/3 complex are important regulators of podosomes. We also characterized several domains of WASp and their contribution to actin filament formation. We are now trying to unravel other signal cascades controlling podosome turnover.
According to our results, microtubules positively regulate podosome formation in human macrophages (see our logo: podosomes and microtubules). In particular, we could show that the kinesin KIF1C localizes to microtubule plus ends where it regulates podosome dynamics (i.e., fission and dissolution). Therefore, we also focus on functional interactions between podosomes and the microtubule system.

Endothelial Cells
Endothelial cells are components of all blood vessels where they form monolayered tubular structures. They control the passage of materials as well as the transmigration of white blood cells into and out of the bloodstream. The integrity and regulation of the endothelial cell layer of blood vessels is therefore of critical importance for physiological and pathological processes such as wound healing, angiogenesis or inflammation. Endothelial regulation demands an exact coordination of cell movement as well as the dissolution and re-establishing of cell-cell-contacts. The basis for these phenomena is the dynamic and exactly controlled regulation of the actin cytoskeleton.
We are interested in the mechanisms regulating endothelial integrity, especially in the context of wound healing and stimulation with bacterial noxes (e.g. CNF-1, see image). Regulators of the actin cytoskeleton, especially effector proteins of RhoGTPases, play important roles here. We are studying these processes and the proteins involved on the molecular as well as on the cellular level.